Verbals are words made from verbs to function as another part of speech. There are three kinds of verbals: participles, gerunds, and infinitives.

Buried in the vineyard, something was hidden.

Having finished the dishes, the counters still needed to be cleaned.

Having finished the dishes, I began to clean the counters.

The subject, I, is modified by the participial phrase, Having finished the dishes.

Identifying an Infinitive’s Part of Speech

My students can find infinitives in sentences, but they have trouble identifying an infinitive’s part of speech. Any ideas?

The following chart should help. 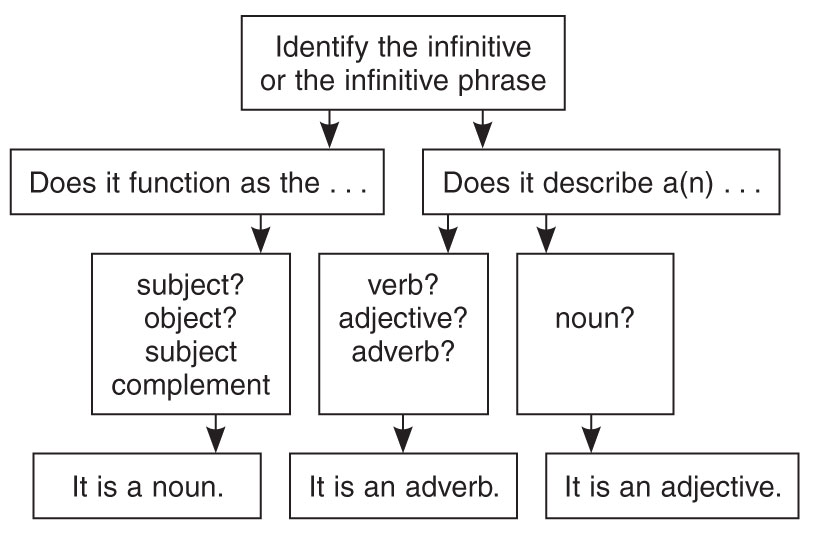 When writing, my students often mix the use of gerunds and infinitives, which leads to problems with parallel structure. For example, I like running or biking rather than to swim or ski. How can I get my students to avoid this word trap?

Remind your students that although it is important to use a variety of sentence structures when writing, the words within an individual sentence should “match”—noun to noun, verb to verb, and verbal to verbal. As an example, explain to students that parallel structure is like putting on shoes before leaving the house, and they wouldn’t wear two shoes that didn’t match. Then show them a variety of sentences that mix gerunds and infinitives and work together to revise the sentences to include either all gerunds or all infinitives. Have students explain the changes they make.

Participles are everywhere. How can I get my students to identify them within sentences?

You’re right. Participles can occur almost anywhere in a sentence. To help your students identify participles, display the visual below.

Use the visual to analyze several sentences with the class.